Wed., January 15, 7 p.m. (co-presented with the museum and the Mandel JCC), DEB FILLER, in I Did It My Way in Yiddish (in English), hosted by the JCC. To accompany the Maltz Museum exhibit “Leonard Bernstein: The Power of Music.”

Wed., May 27, 7 p.m., at the Museum, a staged reading of BAUER, by Lauren Gunderson. Directed by Mitchell Fields. The program is presented as part of the citywide festival “CENSORED: ART & POWER,” organized by the Cleveland Orchestra.  CANCELLED 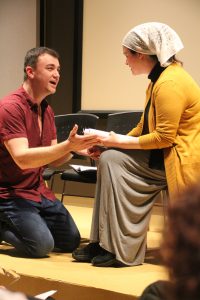 Wednesday, April 12, 7 p.m. (co-presented with the Maltz Museum) “Beyond the Call: Bruce Klunder and the Fight to Save Cleveland’s Schools,” a panel discussion featuring Rachel Fair, Nina Domingue Glover, James Hardiman and Charlene Reed-Mundell. Program accompanies the exhibition “This Light of Ours: Activist Photographers of the Civil Rights Movement.”

April 7, 1:00-3:00 p.m. – Incident at Vichy, by Arthur Miller – looks at the guilt, fear and complicity of individuals facing judgment in Vichy, France

May 5, 1:00-3:00 p.m. – Our Class, by Tadeusz Slobodzianek – the story of Polish schoolmates – Gentiles and Jews – whose friendships – and lives – are destroyed by antisemitism, violence and lawlessness.

Sunday, October 18, 2015, 2 p.m., A Happy End, by Iddo Netanyahu. Staged reading of a play set in Berlin, in 1932, shortly before Hitler’s rise to power. Noted physicist Mark Erdmann and his wife are too comfortable in the lives they know to risk starting over in a strange place. A play about the dangers of complacency. Featuring: Khaki Hermann, Kyle Huff, Susan Lucier*, James Rankin, and George Roth*. RESERVATIONS AND TICKETS: (216) 593-0575.

Sunday, Aug. 16, at 2 p.m.,  Extra Innings!  The Baseball Plays: Seventh Inning Stretch, at Cleveland’s Historic League Park, 66th and Lexington Ave. Includes free tours of the ballpark, before and after the reading. ADMISSION IS FREE, although donations to the Baseball Heritage Museum are welcome.

In November 2013, the Maltz Museum of Jewish Heritage invited Interplay to present a staged reading to commemorate the 75th anniversary of Kristallnacht. We produced The Quarrel, a stunning drama by David Brandes and Joseph Telushkin. In it, two former Lithuanian Yeshiva students – best friends – find each other in 1948 in a Montreal park. The friendship had been severed years earlier when they developed incompatible views of God and secularism. The two men, now Holocaust survivors, meet to resume their quarrel.

From that beginning, Interplay joined the Maltz Museum in a series of works presented in 2014:

Events at the Maltz may have an admission fee. Reservations and information are available at www.MaltzMuseum.org, or by calling (216) 593-0575